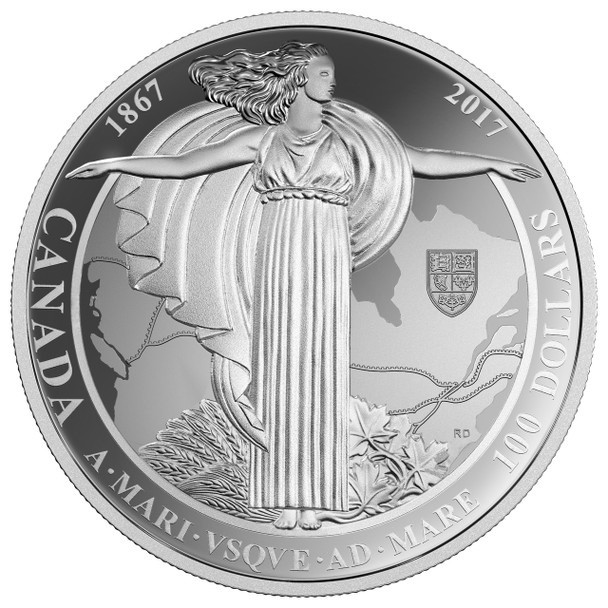 On July 1, 1927, the Dominion of Canada marked 60 years of progress under the banner of Confederation. To commemorate the occasion, the Diamond Jubilee of the Confederation of Canada Medal was issued as a special presentation piece that expressed a nation’s pride and identity on its Diamond Jubilee. As we celebrate 150 years of Confederation, the Royal Canadian Mint travels back in time to revisit another historic year—a distant predecessor to Canada 150—through a magnificent artefact that is part of our medallic history.

DESIGN
Inspired by a general design by Canadian illustrator Charles William Jefferys, the reverse design is a tribute to the original (1927) design by Raymond Delamarre.
With arms spread wide to embody Canada’s motto, Ad Mari Usque Ad Mare (“From sea to sea”), a robed female allegory is engraved in high relief as a symbol of a young nation’s strength. She stands among sheaves of wheat that signify growth and prosperity across Canada, which is also represented by the clusters of maple leaves at her feet. Rising up behind her, a map of the Dominion of Canada is marked by transcontinental railroad links and the shield from Royal Arms of Canada (as it appeared in 1927). The combination of different finishes adds a subtle modern flair to the design, while a circular frame bears the engraved words “CANADA” and “A MARI VSQVE AD MARE”, the face value “100 DOLLARS” and the commemorative dates “1867” and “2017”.
The obverse features the effigies of Her Majesty Queen Elizabeth II by Susanna Blunt and Her Majesty Queen Victoria by Leonard Charles Wyon. The obverse also includes the Royal cypher used by Her Majesty Queen Elizabeth II, and a cypher used by Queen Victoria. Each Royal cypher is ensigned with a crown depicted in a style specifically used by each monarch.

Now: $134.95
Was:
Millions of years ago, the Canadian landscape was teeming with prehistoric species whose remains lie in the rocks that bridge our era with theirs. This is Ancient Canada! Through unique striking...

Now: $139.95
Was:
Imprinted upon our nation’s most important documents, the Great Seal of Canada signifies the sanction of the Crown, the authority of the government and the authenticity of the document in question...

Now: $649.95
Was:
In the first 100 years of Confederation, the story of Canada was shaped by our efforts to bridge distances and come together — first by rail, then by sea, and finally, by air. It is the story that...

Now: $1,099.95
Was:
This low mintage coin is the third in a series of three important historical pieces commemorating Canadian Confederation. Each medal features a historical landmark along the path of Canadian history:...