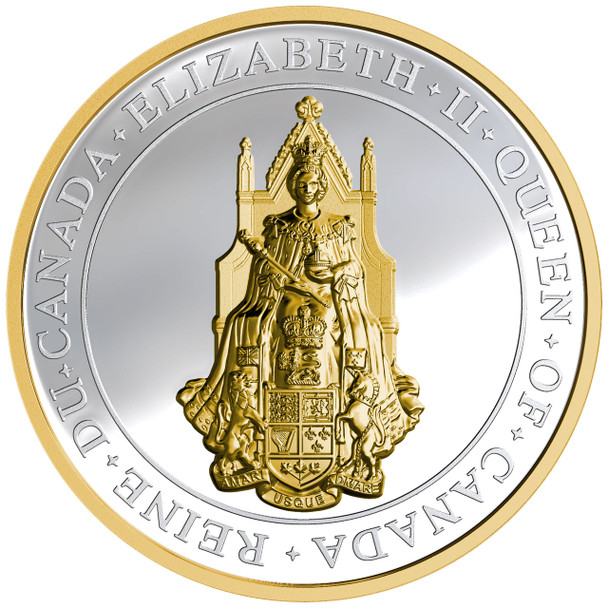 Imprinted upon our nation’s most important documents, the Great Seal of Canada signifies the sanction of the Crown, the authority of the government and the authenticity of the document in question. Through this beautifully engraved representation of a highly respected Canadian instrument of government, the Royal Canadian Mint proudly pays tribute to a ceremonial and administrative tradition that dates back to Confederation.

The reverse design represents the current Great Seal of Canada, which was struck by the Royal Canadian Mint in 1952. While the coin’s 36 mm diameter provides a smaller canvas for this representation, nearly every element of Eric Aldwinckle’s design is in place. Engraved in ultra-high relief, the robed figure of Her Majesty Queen Elizabeth II is enthroned on the Coronation Chair in Westminster Abbey, and holds the orb and sceptre in her hands. Framed by a band bearing the bilingual inscription “REINE DU CANADA – ELIZABETH II – QUEEN OF CANADA”, the embossed image basks in the golden hue of selective gold plating, which also adds an elegant touch to the rim on both the obverse and reverse. The obverse features the gold-plated effigy of Her Majesty Queen Elizabeth II by Susanna Blunt, along with the engraved word “CANADA”, the face value “25 DOLLARS” and the year “2017”.

Now: $159.95
Was:
On January 22, 1992, the NASA space shuttle Discovery launched from Kennedy Space Center in Cape Canaveral with a crew of seven—including neurologist Dr. Roberta Bondar, M.D., Ph.D., who holds the...

Now: $49.95
Was:
KEY FEATURES This is Canada. Celebrate some of the sights and experiences that make Canada unique! Each coin highlights a famous Canadian symbol or scene that has shaped this nation’s image and...