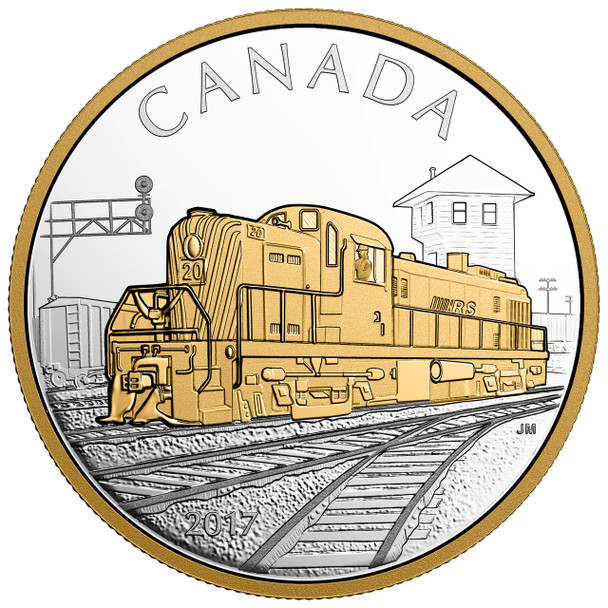 Following an unprecedented era of expansion, the 20th century ushered in an era of consolidation and technological innovation in Canada’s railway history. The second coin in the Locomotives Across Canada series commemorates the end of the golden age of steam locomotives, and the introduction of a new technology that continues to power today’s trains: the diesel-electric locomotive.

The reverse design by Canadian artist John Mantha looks back at the first wave of diesel-electric locomotives that were introduced in Canada in the 1940s and 1950s. Used by the Roberval and Saguenay Railway, the RS 20 was the first diesel road locomotive manufactured in Canada, and was built in 1949 by Montreal Locomotive Works. The selective application of gold plating places the focus on the early RS-2 road-switcher, which is made all the more visible thanks to the tiger-striped pattern, painted at the front. The rail yard in the engraved background is bustling with activity, and typifies the environment in which these versatile workhorses shine.

Now: $119.95
Was:
The button-like flowers of pearl yarrow (Achillea ptarmica ‘The Pearl’) are brought to life by not one, but three mother-of-pearl embellishments that adorn this 99.99% pure silver coin...

Now: $134.95
Was:
Roughly 500 million years ago, early arthropods known as trilobites thrived in the ancient seas that covered our planet during the Cambrian Period. Today, their remains are the object of study and...

Now: $134.95
Was:
Millions of years ago, the Canadian landscape was teeming with prehistoric species whose remains lie in the rocks that bridge our era with theirs. This is Ancient Canada! Through unique striking...

Now: $161.95
Was:
First used as a symbol for this land in the 1700s, the maple leaf continues to inspire a sense of pride and belonging in the people it represents, and whose endeavours have made the leaf a shining...

Now: $99.95
Was:
This exciting new coin series brings you the fascinating art of illusion to celebrate Canada’s natural heritage with unprecedented and utterly captivating designs. Each coin features an image...

Now: $114.95
Was:
Anyone who has ever had a perfectly shaped snowflake land on their sleeve or glove knows it’s one of winter’s greatest delights. A snowflake is a fleeting work of art that only lasts a...

Now: $151.95
Was:
Nature is a source of endless fascination, and this beautiful coloured coin celebrates one of its tiniest creations with a Murano glass beetle poised on a coloured design of a dogbane plant. Murano...

Now: $189.95
Was:
Encountering orcas in the wild is one of nature’s most awe-inspiring sights, but here, during the hush of twilight, the scene is utterly sublime. Exquisite engraving and colour reveal a...

Now: $159.95
Was:
Celebrate a unique Canadian achievement with this unique rectangular coin honouring the connection of The Great Trail by Trans Canada Trail—in time for Canada’s 150th anniversary of...

Now: $199.95
Was:
On Canada Day, Parliament Hill is awash in a sea of red and white that is a proud expression of patriotism—especially in 2017, when Canadians come together to celebrate 150 years of...

Now: $1,249.95
Was:
The elk or wapiti (Cervus canadensis) is highly sociable and communicative at all times, but the regal bull’s loudest vocalizations are reserved for the rut in the fall, when he bugles loudly...

Now: $69.95
Was:
To be out in the wilderness, away from the hustle and bustle of modern-day living, is truly a breath of fresh air for many Canadians! In a timeless tradition, a roaring campfire represents the...