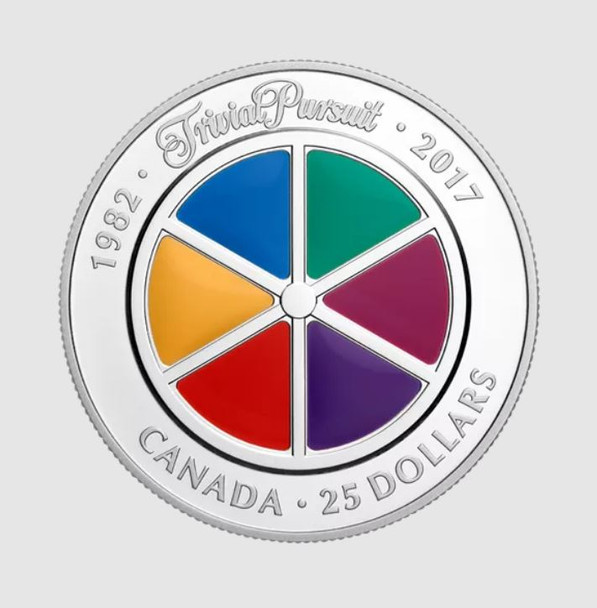 In 1982, what would become one of the best-selling board games of all time first took the world by storm. Everybody wanted to be the first to fill their game piece with six coloured wedges—and prove their trivia prowess. Trivial Pursuit game became a pop culture phenomenon: a trivia craze that sparked multiple game editions, computer versions, apps and even television adaptations!

Far from trivial is the pride that Canadian players feel knowing that Trivial Pursuit game was invented in Canada (Montréal, Quebec to be exact)—an achievement that's celebrated with this must have coin!

Everybody is a winner with this unique piedfort coin representing an iconic Trivial Pursuit game piece with all six of the coveted wedges in vibrant enamel: history (yellow), geography (blue), science and nature (green), entertainment (pink), arts and literature (purple), and sports and leisure (orange).

An ideal gift for someone who enjoys playing Trivial Pursuit game! Don't be disappointed, hurry and order your coin today!

Your coin design pays tribute to the enduring popularity of Trivial Pursuit game, its Canadian origins, and its 35-year history as one of the top-selling board games in the world. The piedfort offers nearly double the thickness of traditional coins, allowing for high-relief engraving to capture the look and feel of a player's rounded game piece ,as viewed from above. The raised elements mimic the appearance of the six individual wedges that complete this game-winning piece, while the application of coloured enamel recreates the iconic colours of each question category: History (yellow), Geography (blue), Entertainment (pink), Arts & Literature (purple), Science & Nature (green), and Sports & Leisure (orange). The reverse also features the iconic "TRIVIAL PURSUIT" game logo engraved between the commemorative dates "1982" and "2017", along with the word "CANADA" and the face value "25DOLLARS". The obverse features the effigy of Her Majesty Queen Elizabeth II by Susanna Blunt.

Packaging mimics a Trivial Pursuit game board and box!

Your coin comes beautifully enclosed in a premium wooden case and custom packaging that cleverly mimics a Trivial Pursuit game board and box.

Now: $149.95
Was:
Proclaimed by King George V on November 21, 1921, the Coat of Arms of Canada stands as a powerful national emblem that speaks of Canada’s history and the proud heritage Canadians collectively share...

Now: $649.95
Was:
DESCRIPTION    A solitary loon gliding across a vast lake-it's an image that speaks to the grandeur of Canada's sweeping wilderness, but what if there's more to the story? Pull...

Now: $109.95
Was:
DESCRIPTION  From the great victories and tragic losses of the First World War came our most enduring symbol of service and sacrifice: the red poppy, which is colourfully highlighted on the...