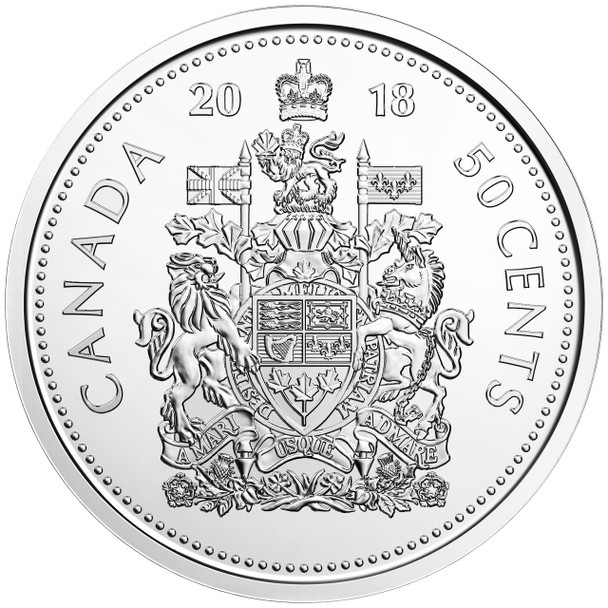 Canada’s Coat of Arms was proclaimed by King George V in 1921 as a representation of Canada, and its political roots, especially its ties to Great Britain and France. The design features images from France (the fleur-de-lis), England (the three royal lions and rose), Scotland (royal Scottish lion and thistle), and Ireland (the royal Irish harp of Tara and shamrock). In 1957, the Tudor Crown originally featured in the Coat of Arms was replaced by Saint Edward’s crown because it represents all of Britain’s monarchs, rather than only those of one ruling family. It was modified again in 1994 so that the motto of the Order of Canada: Desiderantes Meliorem Patriam, Latin for “they desire a better country”—could be added.
Although proclaimed in 1921, Canada’s Coat of Arms did not appear on the fifty-cent piece until 1937, and it was not until 1959 that the design was modified to include Canada’s motto: A Mari Usque ad Mare—“from sea to sea.” In 1997, the first fifty-cent pieces featuring the addition of the Order of Canada’s motto were struck.

Now: $239.95
Was:
Canada’s 50-cent remains a constant, if elusive, collector favourite — one whose heraldic design imbues it with a deep sense of tradition and speaks to the history of a proud nation...

Now: $279.95
Was:
Canada's history is rife with tales of explorers, and the seafaring Captain James Cook (1728-1779) is one of the most storied of all. From the Bering Strait to the Antarctic Circle, and many of the...