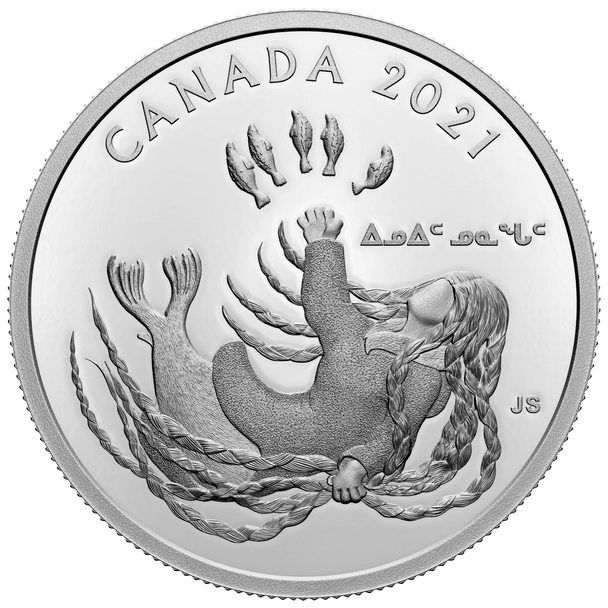 THE LEGEND OF THE SEA GODDESS*

Nuliajuk was a beautiful girl who had refused many offers of marriage. One day, a young hunter arrived at her father’s camp; dressed in warm furs, he spoke in a soft voice and promised to provide Nuliajuk with a good home and animals for food and clothing. He kept his face hidden under his hood but Nuliajuk was sufficiently impressed with him, and she agreed to marry him. When she arrived at her new home on a remote island, Nuliajuk discovered that her husband was not a man but a bird. Cold and hungry, she cried out for her father to come save her. But as she and her father paddled away, they were caught in a strong wind created by the bird’s furious wingbeats. Fearing for his life, Nuliajuk’s father threw her over the side of the umiak. She tried to save herself by holding on, but her father cut off her fingers and she fell into the water. As she sank to the bottom of the ocean, her fingers and hands took the form of different marine mammals and she became the Sea Goddess. Hunters came to depend on her goodwill: when humans transgress the laws of nature, the Sea Goddess keeps her children (the sea animals) away, and the Angakkuq (shaman) must appease her by combing her hair.

*This is just one version of the legend, which may differ from region to region

Now: $184.95
Was:
DESCRIPTION This silver coin celebrates the iconic logo for BATMAN™. It has been shaped, coloured and engraved to resemble BATMAN’s calling sign. The Bat shines out in silver w

Now: $1,099.95
Was:
A Robert Bateman exclusive. This is the latest engraved showcase of a Robert Bateman original Each photo realistic work of art including the pencil sketch that inspired this coin tells...