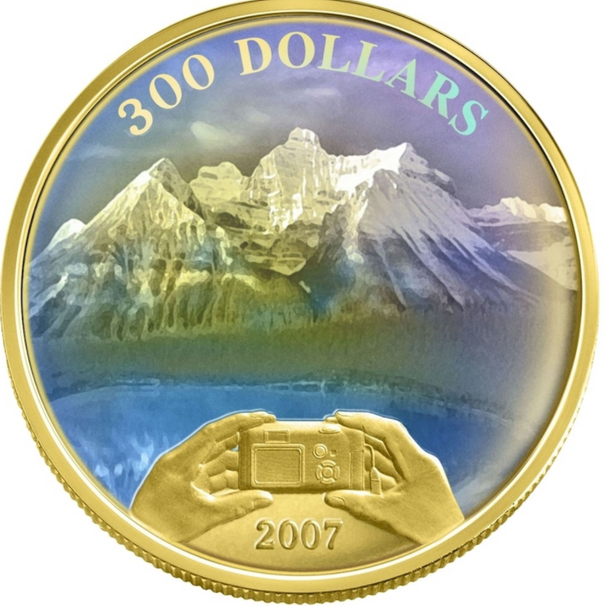 The Royal Canadian Mint recreates the grandeur and immensity of the Canadian Rockies on this $300 Gold coin through the magnificent use of photographic hologram technology. The colours are so true to life that you will feel that you are actually in the presence of these celebrated mountains.

As photography emerged in the early 19th century to deliver a level of realism the world had never seen, those who sought to recreate Canada's vastness using a lens found even this latest technology could not capture the full scope of the scenery that lay before them.

Finally, success! Canadian John R. Connon's invention of 1887 was one in a flurry of technological innovations that enabled this new generation of artists to capture a vast image on film - from 180 to a full 360 degrees! Just like the early adventurers that had trekked hundreds miles and scaled colossal heights, photographers triumphed over Canada's seemingly unconquerable landscape, bringing a true sense of this stunning world to those who could not venture there - a vision that propelled photography throughout the 20th century and reigns to this day.

Now: $3,630.94
Was:
We slide in it, make snowmen and forts with it and even try to catch it on our tongues! Winter's wondrous gift of the snowflake turns months of frigid cold into a season of joyful play and incredible...

Now: $84.95
Was:
PANORAMIC CAMERA – NIAGARA FALLS   The Royal Canadian Mint recreates the awe inspiring quality of Niagara Falls on this $30 Silver coin through the magnificent use of photographic hologram...

Now: $3,485.70
Was:
Conclude the Royal Canadian Mint’s popular 14-coin series of 14-karat gold series featuring the Coats of Arms of Canada’s 10 provinces and 3 territories, the Canadian Coat of Arms is presented in...

Now: $3,485.70
Was:
Designing a nation's character   During the Middle Ages, any knight who went into battle needed to distinguish friend from foe and would paint identifying marks on his shield. Later,...

Now: $1,099.95
Was:
A Robert Bateman exclusive. This is the latest engraved showcase of a Robert Bateman original Each photo realistic work of art including the pencil sketch that inspired this coin tells...