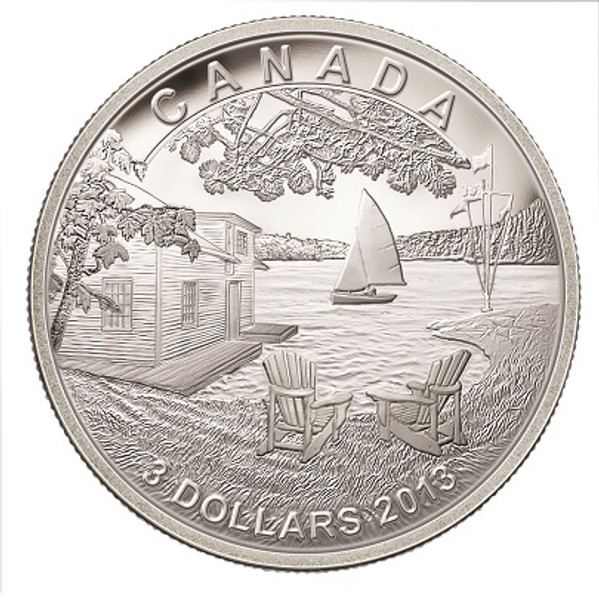 Description:
This $3 fine silver coin is a unique keepsake that delivers a touching and intimate perspective of Canada according to one of its most treasured personalities, Martin Short. Short consulted extensively with Canadian artist Tony Bianco to create this coin to express what Canada means to him. It features Short’s summer home in the Muskoka of northern Ontario—a peaceful and inviting place that Short affectionately describes as, “the most staggeringly beautiful part of Canada,” that serves up all the amenities necessary for him to laugh, play and relax like nowhere else on Earth.

The coin’s reverse design shows a sailboat gliding across a serene lake towards a boathouse while pine and maple trees provide an inviting canopy over two Adirondack chairs. Nearby, Canada’s National Flag proudly waves from a marine-inspired flag pole standing on one of the region’s signature whaleback rocks.

The obverse features the effigy of Her Majesty Queen Elizabeth II by Susanna Blunt.

Complete Certificate Text:
My Canada
“Canada is the most remarkable country in the world.
In my international travels all these years, I’ve never met anyone who wasn’t rather envious when I proudly proclaimed that I was indeed Canadian. As they should be. Multi-cultural, multi-faceted, multi-hip; that’s Canada to me. And as much as I adore the excitement of its cities, it’s rural Canada that has always had my heart.

I am lucky enough to own a cottage on a lake roughly three hours north of Toronto in a staggeringly beautiful part of Canada known as Muskoka. It’s nature at its most spectacular; so peaceful, inviting and serene. And when I’m there, I laugh and play like nowhere else. When I’m there, I feel like I’m in heaven. More than anything, that is what Canada means to me.”

Martin Short
Martin Short: Canada’s comedic treasure
Canadian Martin Short is a celebrated comedic performer known for his clever wit, versatility and superb comic timing. Although Short originally studied for a career in social work, his true path quickly materialized when his friend Eugene Levy encouraged him to give television a try.

Success with CBC’s Second City, then SCTV and Saturday Night Live led to film and Broadway and a continually remarkable career. For over forty years, Martin Short has done it all. His awards list is equally diverse and includes a Gemini, an Emmy, a Tony, the Order of Canada plus a Queen Elizabeth II Golden Jubilee Medal. Short currently lives in California, but his all-time favourite place remains Lake Rosseau in northern Ontario.

Now: $89.95
Was:
Theme:Celebrating 75 Years of Ducks Unlimited Canada: The Mallard—Icon of Canadian WetlandsDescription: This silver 10-dollar coin measures 34 millimetres and weighs 15.87 grams. The reverse image by...

$21.95
Now: $18.00
Was: $21.95
Start a new tradition with an original heart-warming holiday coin and gift set. With its unique $1 coin, this set continues to be one of our most popular holiday gifts. Friends and family will love...

Now: $15.00
Was:
This listing is for the subscription box ONLY, coins are sold separately. A unique musical display with colourful the images of the birds. When opened, it plays the harmonious sounds and songs of...