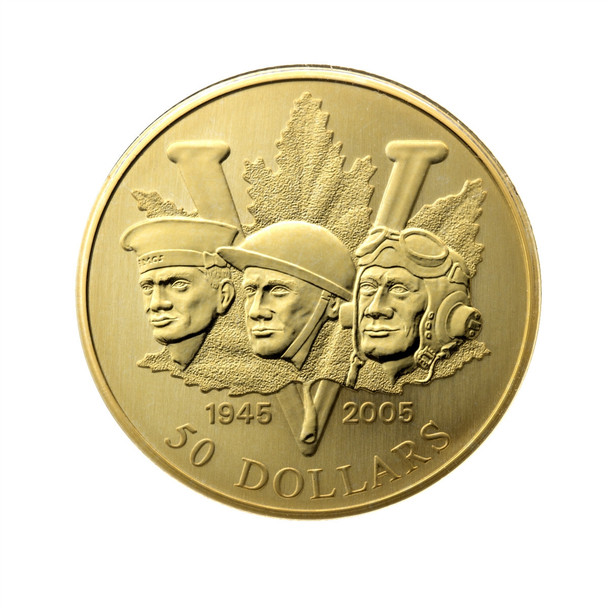 Victory at last!
Celebrating the 60th Anniversary of the End of the Second World War

When the Second World War began with Hitler's invasion of Poland on September 1, 1939, Canada was hardly prepared to take up arms. Its regular army had a mere 4,500 men, supported by 51,100 partly-trained reservists. Less than 20 modern aircrafts and only six warships were at the ready.

Still, this nation of 11 million people rose to the challenge in support of Britain and France.

Canada declared war on Germany on September 10th, 1939, and by month's end, over 58,000 Canadians had enlisted to assume military roles. Canada's contributions were diverse, and every role was carried out with conviction and honour.

In total, more than one million Canadians joined the fight for freedom but the cost was high: over 45,000 ddead with thousands more scarred for life.

On May 8, 1945, they celebrated Germany's surrender and eagerly waited to return home. By early 1946, most were back in Canada to discover that their great sacrifice had forged a new world. Not only did it win freedom, it shaped the identity of a nation and earned Canada newfound respect around the world.

Now: $24.95
Was:
2007 25-cent coin - The Queen's 60th Wedding AnniversaryCelebrating Her Majesty Queen Elizabeth II on her 60th wedding anniversary Princess Elizabeth was just 13 years old when she met her future...

Now: $22.95
Was:
THE STORYA commemoration that pays tribute to the fallen and keeps a promise to never forget.With its “ for Victory and its coded message to Canadians everywhere, Thomas Shingles’ Victory nickel...

Now: $637.76
Was:
The first Canadian two dollar coin was issued in 1996 to replace the two dollar bank note which was withdrawn from ciculation. To mark this event the Numismatic Deparmnet of the Roal Canadian Mint...