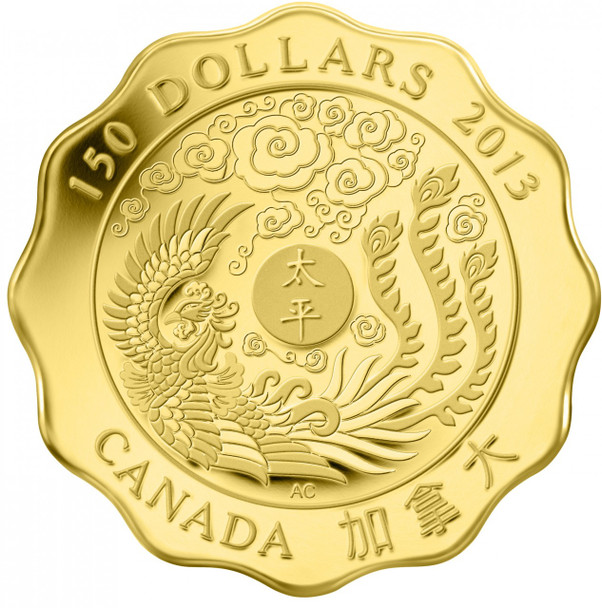 Theme:
This stunning scallop-edged pure gold coin celebrates the strong and vibrant Chinese communities of Canada, the unique heritage of Chinese Canadians, and the unique customs of this ancient culture—while conferring on its owner a powerful blessing of peace.

Description:
This 99.999% pure gold coin has a diameter of 22.5 millimeters and weighs 10.4 grams. It is the fifth coin in the Royal Canadian Mint’s lotus-shaped coin series celebrating the history and traditions of Canada’s Chinese communities. The reverse image features Canadian artist Aries Cheung’s striking phoenix and auspicious clouds design. Around a circular “sun” bearing the Chinese symbols for “peace,” the reverse image features a stylized phoenix rendered in breathtaking detail. The bird’s pheasant visage and sharp parrot bill are viewed in striking profile, facing the left side of the coin. The phoenix raises its right swallow wing above its head while its left wing folds delicately beneath its duck-like body. Each feather is executed with deft skill to enhance the design’s depth and beauty. Three graceful peacock tailfeathers flow out from behind the bird, filling the right side of the reverse’s central field. Above the phoenix is a stylized sky filled with swirling peony-like clouds. The scalloped outer band encircling the reverse field is engraved with the word “CANADA” and the Chinese characters for “CANADA”, the face value “150 DOLLARS” and the date “2013.” The obverse features the effigy of Her Majesty Queen Elizabeth II by Susanna Blunt.

Packaging:
Coin is encapsulated and presented in a Royal Canadian Mint branded maroon clamshell case lined with flock and protected by a black sleeve.

Complete Certificate Text:
2013 Blessings of Peace
The mythical bird of Chinese art known in English as the phoenix is referred to as the “king of birds” or “epitome of birds” in Chinese tradition. This exceptional creature, associated with royalty—especially Empresses—bears the highest rank among birds. Its physical form, as presented in Chinese art, is traditionally understood to be a composite of various birds. It has the head of a pheasant, the body of a duck, the legs of a crane, the wings of a swallow, the bill of a parrot, and the tail of a peacock. As a symbol, this magnificent creature represents beauty and good fortune. Because it is said to appear only in times of peace, the phoenix is also strongly associated with the notion of peace.

Associated with the element of fire and the direction south, the phoenix is one of the oldest animals portrayed in Chinese art and is found on decorative objects dating back thousands of years. The phoenix is considered one of the “supernatural spirits,” along with the dragon, tortoise, and unicorn, and is often paired in visual images with the dragon, which is “yin” to the phoenix’s “yang” nature (Is this correct, or the other way around? Please use latest vetting by our Chinese Expert.)—part of the common motif of paired opposites in Chinese visual tradition.

The Chinese character for phoenix, feng, is often used for the naming of people and objects whose namers wish to bestow upon them charm, balance, and peace, such as musical instruments and certain foods. It is also a popular character in the naming of girls.

Now: $109.95
Was:
Theme:This stunning fine silver coin is the perfect backdrop for the sparkling hologram of two maple leaves that sits at its centre.Hope for long-term peace and good fortune are important markers of...

Now: $1,059.62
Was:
The theme, based on Chinese astrology, is a very popular one in Asia and is rapidly gaining popularity in the West. This series which began in 2000 and continues for the upcoming...

Now: $564.59
Was:
10 sets from 1965  sealed in their original shipping boxes from the Royal Canadian Mint.  The sets inside are sealed inside a transparent plastic film and presented in a keepsake envelope...

Now: $749.95
Was:
Fearing the actions of a god-like Super Hero left unchecked, Gotham City’s own formidable, forceful vigilante takes on Metropolis’s most revered, modern-day saviour, while the world...

Now: $2,350.95
Was:
Bugs. Daffy. Tweety. Sylvester. For many Canadians, the mere mention of these names evoke fond childhood memories of spending Saturday mornings in front of a television, transfixed and spellbound as...

Now: $19.95
Was:
Start a new tradition with an original heart warming holiday coin and set. With its unique $1 coin, this set continues to be one of our most popular holiday gift sets. Friends and family will love...