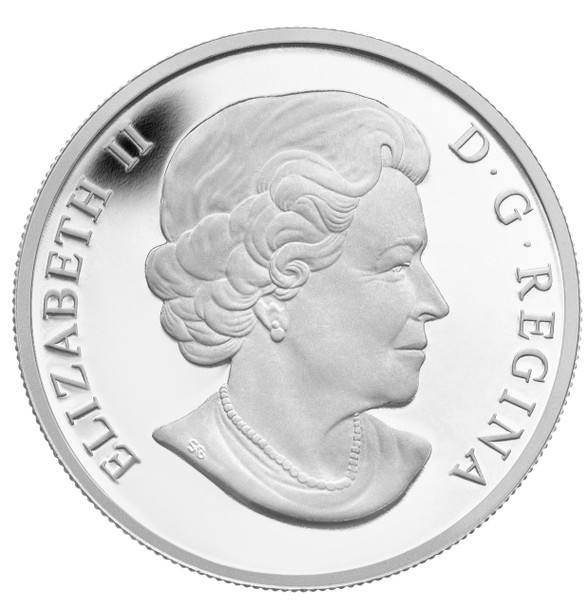 Description:
This coin is certified to be 99.99% silver with a diameter of 38 millimetres and a metal weight of 31.39 grams The reverse design by Canadian artists Pierre Leduc presents an adult female orca and her young calf swimming near a rocky outcropping on the ocean floor. The mother’s distinctive rounded rostrum (snout) and light markings are presented with expert engraving, highlighting characteristic light spots above the orca’s eye, on the lower jaw, and at the midpoint of her body both at her belly and behind her dorsal fin. Her powerful tail bends to propel her through the water, its bright underside visible. Bubbles rise from the blowhole atop her head. Beside her the young calf, that bears the same markings as its mother, swims comfortably, bubbles also rising from its blowhole. In the foreground of the image we see a rocky outcropping from the ocean floor populated by various sea grasses. Stylized line-work and expert engraving perfectly capture the sense of depth and buoyancy of the underwater image. The reverse image is framed with a border engraved with the word “CANADA,” the date “2013,” the face value of “25 DOLLARS,” and a stylized orca tail fin. The obverse features the effigy of Her Majesty Queen Elizabeth II by Susanna Blunt.

Packaging:
Each coin is encapsulated and presented in a maroon clamshell case lined with flock and protected by a customized full color beauty box.
Finished size: 67 mm x 67 mm

Canada’s national identity is much like its majestic landscape: diverse, storied, and sometimes elusive. In the ever-changing tectonics of Canadian culture, identifiers tend to reflect the nation’s multicultural nature and its geography, fauna and flora, and social and political institutions. Born of this complex background, Canadian icons are distinct because they carry meaning for all Canadians, regardless of where we live or how we came to be here. These are the images that plumb the depths of Canadian pride and kindle Canadians’ love for their home.
The Amazing Marine Society of the Orca

The species Orcinus orca, known commonly as the “orca” or “killer whale,” is one of the planet’s most uniquely social mammals. Only elephants and higher primates have societies that are as complex and robust as that of the orca. This marine mammal’s social structure, which some researchers refer to as a “culture,” reveals familial bonds, modes of communication, hunting habits, and other practices that are passed on for generations.

Orca social structure is matrilineal, centering on a maternal group that includes a mother and her offspring. Because female orcas can live up to 80 or 90 years in the wild, these family groups include up to three or four generations. Unlike other mammals, orcas stay with their maternal group—or in close regional proximity to it—for their entire lives.
Groups of families that are known to travel and socialize together are referred to as pods. In Canada’s Pacific Northwest region, for instance, there are approximately 20 resident pods comprising a total of more than 300 orcas, common on the coast from spring to fall. These pods are broken into two communities: the Southern Resident group of about 90 individuals and the Northern Resident group of about 240 individuals. Fascinatingly, these two communities have never been known to mix.

Orca society is further delineated by dialect. Orcas have distinctive vocal communication abilities that include a variety of whistles, clicks, and pulses. They use these sounds for echolocation of prey, navigation, and social interaction and communication. Their vocabulary of sounds is sufficiently distinctive between groups that orca populations are classified into linguistic clans—pods that share the same collection of calls.

Orcinus orca is the largest member of the dolphin family. It is a massive species whose males are 8 metres long in average, weighing more than 6 tonnes and whose females are slightly smaller, 7 metres in average, and weighing up to 4 tonnes. The orca is the fastest marine mammal on Earth and can swim at speeds of almost 60 kilometres per hour (30 knots). It is known for its distinctive black colouring with white markings behind the eyes, belly, and sides of its large, dense body. It is noted for its intelligence and playfulness with humans, such as fishermen, even in the wild. Orcas are found around the world, in water bodies of all depths, temperatures, and salinity. Canadian orca populations in the Pacific and Atlantic have varied protection status depending on their home region and transience habits.

Now: $2,299.95
Was:
Hold the haunting gaze of the legendary spirit bear in the palm of your hand and be transfixed! This is the third coin in the Royal Canadian Mint’s sold-out annual series featuring...

Now: $109.95
Was:
Throughout its history, each of the nickel’s transformations provides a glimpse of a young nation that was seeking to define itself, and a Mint that would come into its own. This Legacy of the...