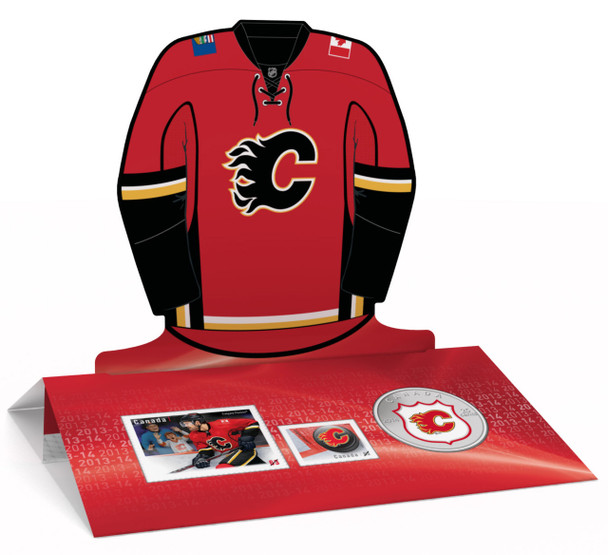 Description:
This painted cupronickel coin has a diameter of 35 millimetres. The reverse design features a coloured team logo in colour captured within the NHL shield on a frosted background. The reverse features the word “CANADA,” the date “2014,” and the face value of “25 CENTS.” The obverse features the effigy of Her Majesty Queen Elizabeth II by Susanna Blunt.

Coin is presented in a folder which pops up to showcase the team’s jersey! This set also comes with two commemorative stamps.

The Calgary Flames first flared up in Calgary, Alberta in 1980, moving there from Atlanta. In what would become one of the premier hockey rivalries of the post-expansion NHL, the Flames fiercely battled fellow Albertans, the Edmonton Oilers, in the Battle of Alberta throughout the 1980s. By 1989, they would earn the Stanley Cup. Known for their generous community involvement, the team moved from the famous Stampede Corral to the Saddledome in 1994, then revamped their home venue for a grand reopening in 1995. A highly decorated team with Presidents’ Trophies, Clarence Campbell Conference titles, numerous divisional titles, and more, the Flames are today a premier franchise.
NHL and the NHL Shield are registered trademarks of the National Hockey League. All NHL logos and marks and NHL team logos and marks depicted herein are the property of the NHL and the respective teams and may not be reproduced without the prior written consent of NHL Enterprises, L.P. © NHL 2013. All Rights Reserved.

Now: $29.95
Was:
Celebrating 100 Years of the Calgary Stampede In 1912, a former rope trick performer named Guy Weadick convinced four Alberta cattlemen to help him build a rodeo festival in Calgary that would...

Now: $39.95
Was:
2014 Coin and Stamp set featuring the Ottawa senators. Description: This painted cupronickel coin has a diameter of 35 millimetres. The reverse design features a coloured team logo in colour captured...

Now: $39.95
Was:
2014 Coin and Stamp set featuring the Vancouver Canucks. Description:This painted cupronickel coin has a diameter of 35 millimetres. The reverse design features a coloured team logo in colour...

Now: $64.95
Was:
It is one of Canada’s oldest and simplest pleasures: as winter sets in, snow-covered hills become playgrounds for families and friends who gather to enjoy the rush of speeding down on sleds and...

Now: $54.00
Was: $64.95
The Canadian winter is a time of celebration and outdoor fun. This beautiful full-colour coin features an original artwork by Canadian artist Tony Harris and captures the joy of a Canadian rite of...