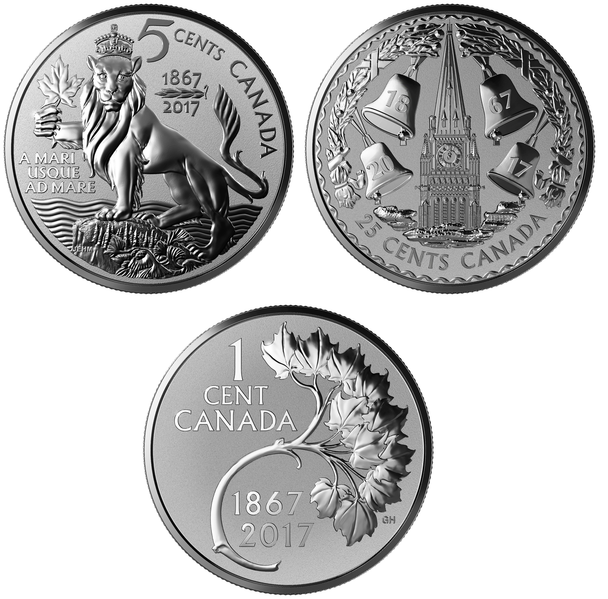 In 1927, three circulation coin designs were chosen to commemorate Confederation’s Diamond Jubilee; alas, they never made it onto a single coin. Ninety years later, the Royal Canadian Mint is re-visiting some of Canada’s coin lore: we’ve dug deep in our vaults to retrieve these concepts and bring them to life in this three-coin set, which artfully bridges the past and Canada 150.

DESIGN
All three coins feature the unused circulation coin designs intended to commemorate Canada’s Diamond Jubilee in 1927. Working with the original sketches (and little else), the Royal Canadian Mint’s engravers set out to interpret each artist’s vision as though the art had been entrusted to them today, to mark Confederation’s 150th anniversary.

The 90-year-old concepts have been painstakingly adapted for modern engraving techniques—including a reverse proof finish that allows the more brilliant engraved elements to shine bright against the matte backdrop. The one-cent coin features an Art Nouveau-inspired design by Canadian artist Gustav Hahn (1866-1962), with a bough of maple leaves encircling the commemorative dates “1867-2017”. The five-cent coin by Canadian artist J.E.H. MacDonald (1873-1932) features a crowned lion gripping a maple leaf as it stands perched on a rock, which represents the changing Canadian landscape cradled by the sea; beneath the forepaw is Canada’s motto, “A MARI USQUE AD MARE” (“From Sea to Sea”), while the commemorative dates “1867” and “2017” are inscribed above the lion. A second design by MacDonald graces the reverse of the 25-cent coin, and centres on a soaring view of the iconic Peace Tower on Parliament Hill. The clock tower soars high above the clouds and is surrounded by a ribbon-wrapped laurel of leaves, from which hangs four bells—an ode to the Dominion Carillon, which was inaugurated on July 1, 1927, during the Diamond Jubilee festivities. Each bell bears engraved numbers that combine to form the commemorative dates “2017” and “1867”.

Now: $199.95
Was:
DESCRIPTION  FULLY GOLD-PLATED: Gives your 99.99% pure silver coin the appearance of being gold! Order today! From coinage to Canada's national flag, the maple leaf is woven into the very...