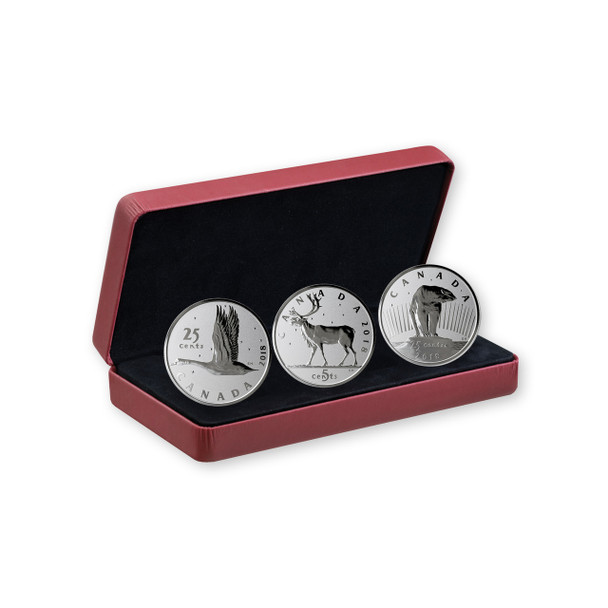 His designs still grace our circulation coins today, but Emanuel Hahn’s numismatic legacy runs deeper than even history remembers. In 1936, the artist submitted several concepts for new circulation coinage, but most were set aside. Now, some of Hahn’s “coins that never were” are finally making the first-time leap from artwork to coin in this three-coin tribute set, which pulls back the curtain to shed more light on an important chapter in our history.

Each reverse features one of several designs proposed by Emanuel Hahn (1881-1957) for new Canadian circulation coins issued in 1937. To remain true to the artist’s vision, the Royal Canadian Mint’s engravers pored over every fine detail contained in one of the few resources still available today: Hahn’s sketches, which are a part of the National Currency Collection.

The first 25-cent coin design (NCC-1963.59.15.35 - Bank of Canada Archives) features a polar bear standing on an ice floe, its head turned toward the right side of the coin, while the open sea is visible behind the mound. A stylistic representation of the Aurora Borealis hangs over the low horizon and stretches across the northern sky, only yielding to the Big Dipper asterism that is a common element on all three coins. The word “CANADA” is engraved at the top while the face value “25 CENTS” and the updated year “2018” are engraved over the ice.

The diamond-like stars are more prominent in the second 25-cent coin design (NCC-1963.59.15.34 Bank of Canada Archives), which centres on a goose in flight. The side-profile view allows for the inclusion of several details, including the flight feathers along the outstretched wings. Here again, the Big Dipper adds a point of interest to the field, where the face value “25 CENTS”, the year “2018” and the word “CANADA” are also engraved in the starry sky.

The five-cent coin’s reverse (NCC-1963.59.15.25 - Bank of Canada Archives) has a remarkable tie to the present: it is Hahn’s original caribou design, the precursor to the one now synonymous with Canada’s 25-cent circulation coin. Viewed in side profile, the ungulate moves beneath the night sky, where the Big Dipper is clearly visible. The caribou’s antlers reach into the legend, where the word “CANADA” is engraved alongside the year “2018”; beneath the flat landscape, an oversized “5” winds its way through the word “CENTS”.

The obverse of each coin features the effigy of King George VI by T. H. Paget.

Now: $74.95
Was:
History and culture run deep in Canada’s North, where the ice-carved landscape is beautiful, fearsome and endlessly fascinating. With its selectively gold-plated reverse, this second coin in...

Now: $94.95
Was:
Throughout the Battle of the Atlantic (1939-1945), Canada and its rapidly expanding fleet of aircraft and ships were on the frontlines, shepherding vital convoys through waters fraught with danger...

$199.95
Now: $158.00
Was: $199.95
Renowned as a fearless hunter and guardian of its territory, the wolf (Canis lupus) has long been perceived as a symbol of strength, and one that is representative of the rugged wilderness found in...

Now: $1,999.95
Was:
Enjoy the season’s breezy beauty with this stunning set of three painted coins featuring authentic Murano glass insects. Highly popular when they were first released beginning in 2011, these...