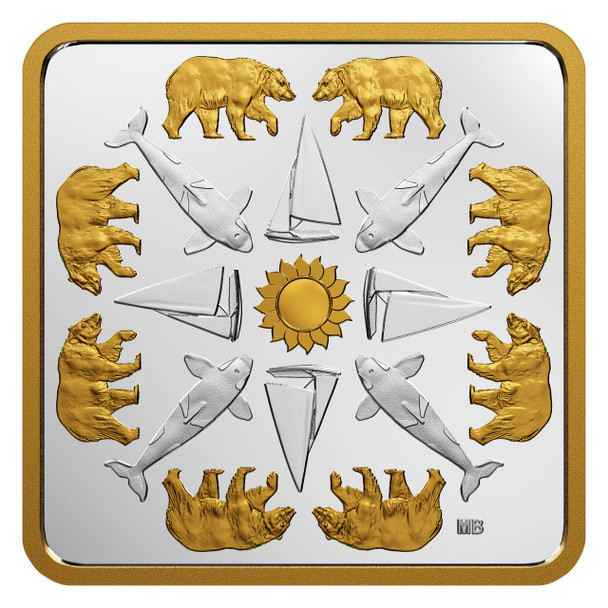 Fading daylight casts a golden hue over Canada’s Pacific coast, where the vast horizon joins land, sea and sky—a powerful reminder that the whole of nature is beautifully interconnected. Beginning in the west, the Canadian Coasts series is a finely crafted, square-shaped ode to the distinctive character of our shores, and the waters that line them.

The setting sun is at the centre of this reverse design by Maurade Baynton. Selective gold plating adds a warm, golden hue to the stylized representation of the sun, which evokes images or memories of spectacular sunsets along Canada’s Pacific Coast. The sun’s warmth and beauty radiates outwards, towards the intricately engraved icons that form a concentric pattern around the centre, much like a compass. As though warmed by the sunlight, the Kermode bear (Ursus americanus kermodei) or spirit bear that famously inhabits British Columbia’s coastal rainforests is also highlighted with selective gold plating. The sailboat represents the sailing tradition along British Columbia’s coast, be it recreational or for fishing, while another great cultural icon, the orca (Orcinus orca), symbolizes our timeless connection with the sea. Gold plating also highlights the rim that frames the reverse, to reinforce the idea that everything in nature is beautifully interconnected. The obverse features the effigy of Her Majesty Queen Elizabeth II by Susanna Blunt.

Now: $74.95
Was:
Shining out from sheltered coves, cliffs and beaches, the lighthouses on our rocky eastern shores have long been beacons of guiding light for seafarers. Canada’s Atlantic coast is the last stop on...