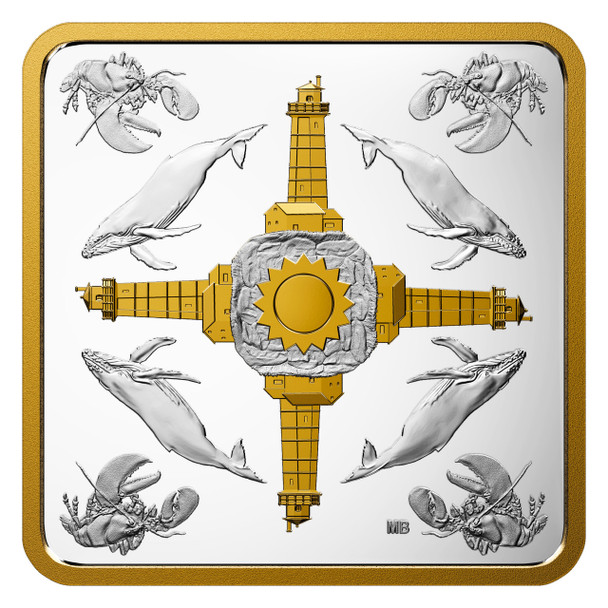 Shining out from sheltered coves, cliffs and beaches, the lighthouses on our rocky eastern shores have long been beacons of guiding light for seafarers. Canada’s Atlantic coast is the last stop on the limited Canadian Coasts series of square coins, which feature a mix of engraved and goldplated images that offer a glimpse of the region’s rich and varied maritime heritage.

The sun rises over the East Coast in this reverse design by Maurade Baynton, where the craggy rocks symbolize the rugged coastline and its many sheltered coves. From its central position, the gold-plated sun casts a warm morning light that illuminates Canada’s oldest operational lighthouse, the Sambro Island Lighthouse, one of many such landmarks that embody the region’s history and spirit. An impressively sized marine mammal, the humpback whale (Megaptera novaeangliae) symbolizes the diverse marine life found in the waters of the North Atlantic and the Gulf of St. Lawrence, where whale-watching has become a popular tourist attraction. Anchoring the corners of the design is the lobster (Homarus americanus), an icon of the Atlantic fishing culture and an economic powerhouse. Gold plating also highlights the rim that frames the reverse, to reinforce the idea that everything in nature is beautifully interconnected. The obverse features the effigy of Her Majesty Queen Elizabeth II by Susanna Blunt.

Now: $104.95
Was:
Antlers crown its regal form, making the caribou (Rangifer tarandus) appear like the monarch of the Canadian wilderness on this fine silver coin. The colourful ode to a Canadian icon is a notable...

Now: $74.95
Was:
Fading daylight casts a golden hue over Canada’s Pacific coast, where the vast horizon joins land, sea and sky—a powerful reminder that the whole of nature is beautifully interconnected. Beginning in...

Now: $104.95
Was:
Canada’s largest wild feline is a rare sight in the forests of Western Canada — but only because of its secretive nature. The third coin in our Canadian Mosaics series offers a chance encounter with...