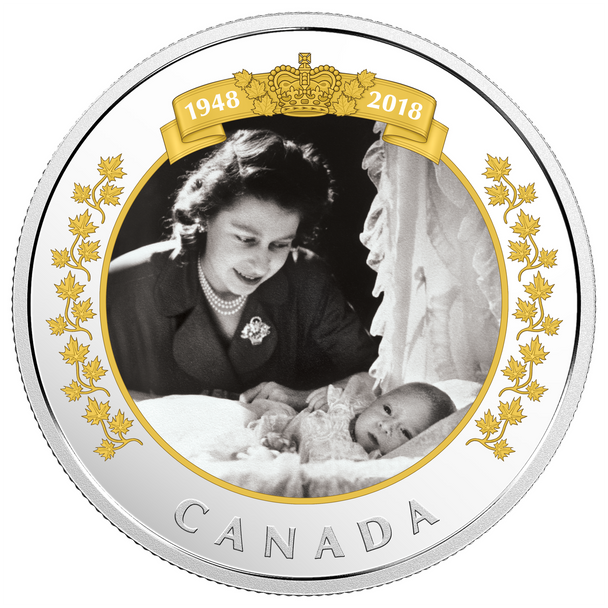 It was 70 years ago that Her Majesty Queen Elizabeth II, then Princess Elizabeth, took on the noble, lifelong role of motherhood. The Royal Canadian Mint proudly presents a picture-perfect coin that is both a birthday celebration for His Royal Highness the Prince of Wales and a touching tribute to Her Majesty as monarch and matriarch.

The reverse features a reproduction of a touching Royal portrait of motherhood, one that was taken 70 years ago at Buckingham Palace. The original black-and-white photograph (©Cecil Beaton/Victoria and Albert Museum, London/Londres) is re-created with a colour application over engraved elements, which add textural relief to the image of Her Majesty (then Princess Elizabeth) gazing down at her first-born son, His Royal Highness the Prince of Wales, when he was five weeks old (December 1948). Designed by Canadian artist Maurice Gervais, the gold-coloured border consists of maple leaves that represent the connection between Canada and the Crown. A scroll banner at the top features a stylized version of St. Edward’s Crown placed between the double dates “1948” and “2018,” to commemorate a Royal birth and 70 years of the dual role of Her Majesty as monarch and matriarch. The reverse also includes the engraved word “CANADA”. The obverse features the effigy of Her Majesty Queen Elizabeth II by Susanna Blunt.

Now: $109.95
Was:
From September 24 to October 1, 2016, some of Canada’s most majestic scenery provided the backdrop for a very special Royal tour! This colourful, fine silver coin preserves the joyous spirit of the...

$99.95
Now: $72.00
Was: $99.95
The first coin in the new 4 coin bison series—celebrating the largest land animal in North America, a symbol of strength, and an important part of the history of the Prairies region of Canada...

Now: $113.95
Was:
During a winter snowfall, each snowflake joins with other unique snow crystals to blanket the Earth with mounds of soft, glistening powder. It's a magical effect, one that breathes peace and beauty...

Now: $109.95
Was:
The 2020 $2 Bill Reid Commemorative circulation coin is a celebration of the Haida artist's legacy and of Haida culture. You'll find one (or more) of these coins in your pocket change, two in our...