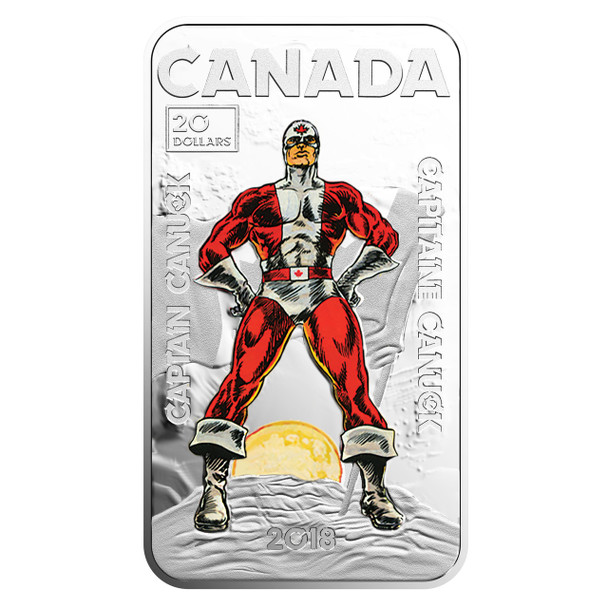 More than a home-grown comic book hero, Captain Canuck personifies the spirit of Canadians by embodying self-sacrifice, determination and integrity — and all with a full dose of humility and compassion. This rectangular coin is the ultimate tribute to a Canadian pop-culture icon, who fights for justice and peace while wearing the colours of our nation’s flag.

Utilizing the coin’s rectangular shape, the reverse mimics the appearance of a comic book — specifically the cover of Captain Canuck No. 1 (July 1975). Key elements from the original cover art by Richard Comely are faithfully replicated by combining precision engraving, various frostings and a selective colour application. The focus is primarily on Captain Canuck, who strikes a defiant pose as he stands on rugged terrain, while the yellow sun hangs low in the northern sky. His maple leaf suit is based on the real-life colours of the large Canadian flag engraved behind him, which further emphasizes the character’s Canadian roots. The reverse includes the engraved word “CANADA” above a corner box element bearing the face value “20 DOLLARS”; “CAPTAIN CANUCK” and “CAPITAINE CANUCK” are engraved on either side of the hero, while the year “2018” is engraved on the land mass below. A laser-engraved maple leaf pattern fills the obverse, which features the effigy of Her Majesty Queen Elizabeth II by Susanna Blunt.

Now: $113.95
Was:
During a winter snowfall, each snowflake joins with other unique snow crystals to blanket the Earth with mounds of soft, glistening powder. It's a magical effect, one that breathes peace and beauty...

Now: $104.95
Was:
Antlers crown its regal form, making the caribou (Rangifer tarandus) appear like the monarch of the Canadian wilderness on this fine silver coin. The colourful ode to a Canadian icon is a notable...

Now: $104.95
Was:
Canada’s largest wild feline is a rare sight in the forests of Western Canada — but only because of its secretive nature. The third coin in our Canadian Mosaics series offers a chance encounter with...