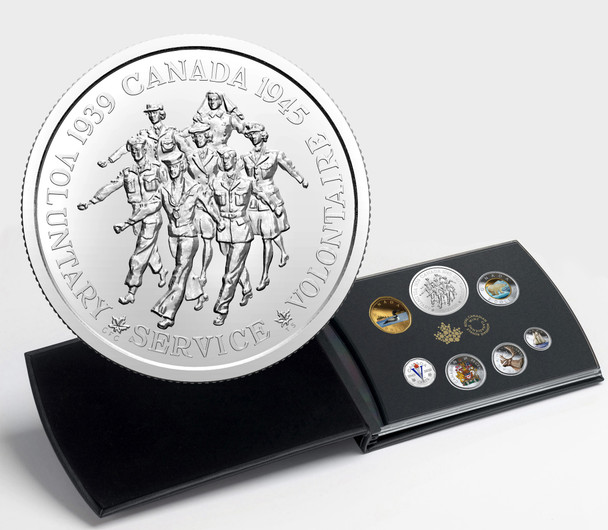 THE STORY
With the creation of the Canadian Volunteer Service Medal ( in 1943 Canada became the first country in the Commonwealth to recognize voluntary service in the Second World War The medal was crafted in 925 silver and engraved by Master Engraver Thomas Shingles The obverse by war artist Charles Fraser Comfort was based on photographs of seven marching members of Canada’s army, air force, navy and nursing service The Reverse features Canada's Coat of Arms used between 1923 1957.
At first, the medal was only awarded to members of Canada’s military forces and merchant navy who “honourably completed 18 months total voluntary service from 3 September 1939 to 1 March 1947 Eligibility was later expanded to include members of the Royal Canadian Mounted Police, as well as various civilian and military support organizations More than 650 000 medals were awarded

Now: $219.95
Was:
In the wake of the First World War, and the Halifax Explosion that left hundreds blind or partially sighted, seven visionaries saw beyond the tragedy and held fast to their ideal that those injured...

$219.95
Now: $193.56
Was: $219.95
In the wake of the First World War, and the Halifax Explosion that left hundreds blind or partially sighted, seven visionaries saw beyond the tragedy and held fast to their ideal that those injured...

Now: $249.95
Was:
This is the limited Royal Canadian Numismatic Association edition of the 2019 D-Day Proof Set. This edition is limited to 100 sets worldwide.     They carried the weight of history with...

Now: $129.95
Was:
Iljuwas (Bill Reid) brought Haida art and culture to a global audience. His extraordinary body of work includes 1,500 pieces ranging from jewellery art to monumental carvings. His artwork has...

Now: $22.95
Was:
Haida artist Bill Reid's contributions to the Haida Nation, and to Canada, through his art have secured his place on our coins. This six-piece circulation set gives you two different versions...