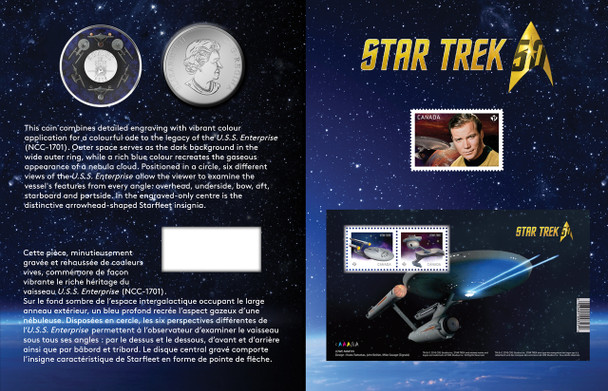 Beloved by millions, the original television series Star Trek™ has arguably helped shape the everyday lives of Canadians through its spirit of scientific innovation and discovery. As the series celebrates its 50th anniversary, the Royal Canadian Mint presents an unforgettable coin and stamp set that pairs a coin with three collectible stamps by Canada Post, all presented in commemorative packaging.

ABOUT THE COIN
The reverse design combines detailed engraving with vibrant colour application for a colourful ode to the legacy of the U.S.S. Enterprise (NCC-1701). Outer space serves as the dark background in the wide outer ring, while a rich blue colour recreates the gaseous appearance of a nebula cloud. Positioned in a circle, six different views of the Enterprise allow the viewer to examine the vessel's features from every angle: overhead, underside, bow, aft, starboard and portside. In the engraved-only centre is the distinctive arrowhead-shaped Starfleet insignia.

ABOUT THE STAMPS
The stamp on the cover features a classic head-and-shoulder photo of the legendary commander of the U.S.S. Enterprise, Captain James T. Kirk (played by Canadian actor William Shatner). Dressed in the gold uniform of Starfleet’s command division, Kirk is positioned against a stunning space-themed background in which his beloved ship is depicted in orbit above a red-coloured planet.
Inside the custom packaging, two coil stamps bring together classic nemeses from the television series. On the left is an overhead view of what is arguably the most iconic spaceship of our time: the U.S.S. Enterprise. Cruising through the stars on her five-year mission of exploration and discovery, the ship is positioned in a way that provides a glimpse of her twin warp nacelles and distinctive saucer-shaped hull, which bears the registration number NCC-1701. Her counterpart in the Klingon Imperial Fleet, a D7-class battle cruiser, is depicted on the second stamp, as it appeared in the episode Day of the Dove. The ship’s iconic long neck and bulbous command pod jut out from the spread-wing hull in a way that gives it an ominous and aggressive appearance.

Now: $29.95
Was:
A perfect gift for BC Lions fans! While supplies last! The BC Lions* have many reasons to celebrate in this 100th Grey Cup® year. Your commemorative stamp relives 1994’s thrilling championship...

Now: $29.95
Was:
A perfect gift for Montréal Alouettes fans! While supplies last! With seven victories in 18 Grey Cup® appearances, the rich history of the Montréal Alouettes* is an integral part of this year ’s...

Now: $599.95
Was:
Celebrate the history and artistry of Canadian circulation coinage with this fine silver 25-cent piece—part of the Royal Canadian Mint’s new series featuring Canada’s six circulation coins. Each...

Now: $54.95
Was:
Beloved by millions, the original television series Star Trek™ has arguably helped shape the everyday lives of Canadians through its spirit of scientific innovation and discovery. As the series...

$549.95
Now: $480.00
Was: $549.95
Celebrate the history and artistry of Canadian circulation coinage with this fine silver 5-cent piece—part of the Royal Canadian Mint’s new series featuring Canada’s six circulation coins. Each...

Now: $119.95
Was:
Since its television debut on September 8, 1966, Star Trek’s™ imaginative storylines have brought Canadian fans on an incredible journey through time and space. As the science-fiction...

Now: $29.95
Was:
Fearing the actions of a god-like super hero left unchecked, Gotham City’s own formidable, forceful vigilante takes on Metropolis’s most revered, modern-day saviour, while the world...

Now: $36.50
Was: $39.95
Ghosts, unexplained events and hauntings… there is no shortage of these stories from across Canada. Many have been told and retold so often that fact and fiction are nearly indistinguishable...

Now: $174.95
Was:
DESCRIPTION  Our 2022 HARRY POTTER™ Season’s Greetings 1oz pure silver coin features images of Christmas in The Great Hall in the Hogwarts™ Castle. Engraved around it are the...