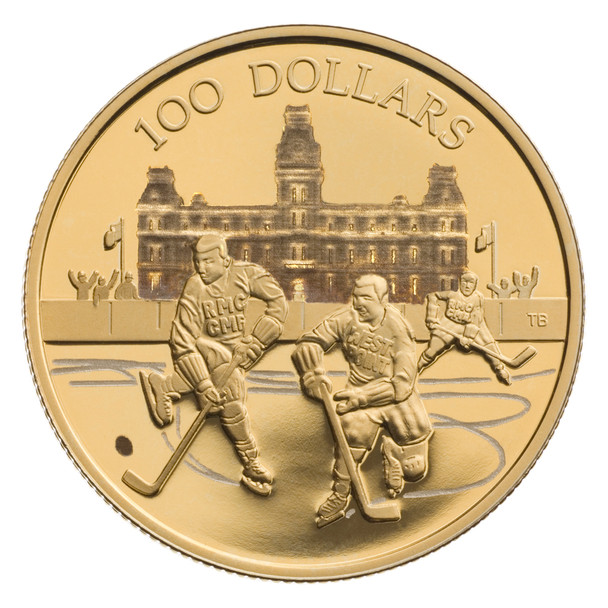 Join the excitement on the ice as Canada's royal military college of Canada and the United States military academy lace up their skates for the 75th game in the ongoing competition between their two institutions.

The brainchild of General Douglas MacArthur, the first game was played in 1923 as a way to foster good will between two national military schools ----- what better way to build team spirit among North America's future military leaders!

This friendly game between gentlemen was celebrated with tea dances and church parades, but once the men were on the ice, spirits quickly intensified. It was a hard fought game that the royal military college of Canada won by a score of 3-0. local reporters billed it as the best hockey in the year and both teams eagerly awaited their rematch the following year.

Packaging:
Coin encapsulated and presented in a maroon clamshell case lined with flock and protected by a black beauty box.

Now: $3,269.28
Was:
11th issue in this bi-annual series. Continue collecting this beautiful series! The Coat of Arms for Ontario incorporates the Provincial Shield that was originally granted by Queen Victoria in 1868...

Now: $1,078.87
Was:
A celebration of the iconic art that has graced the covers of Superman DC comic books throughout all eras of Superman’s history, from 1938 to the present. PRODUCT SPECIFICATIONSSRP: $750.95Item...

Now: $749.95
Was:
Fearing the actions of a god-like Super Hero left unchecked, Gotham City’s own formidable, forceful vigilante takes on Metropolis’s most revered, modern-day saviour, while the world wrestles with...