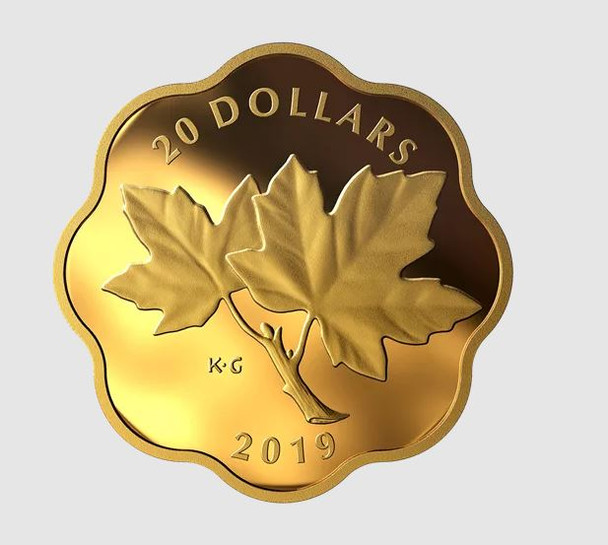 From coinage to Canada's national flag, the maple leaf is woven into the very fabric of this nation's history reaching back to the 1700s. In 1858, when the first pennies were struck for the Province of Canada, maple leaves dominated the design. In 1920, an updated motif reduced the number of leavesfrom 16 to two; and in 1937, the maple twig you see on this coin made its debut—a bold move when the Dominion of Canada created its own designs to reflect its growing sense of nationhood. Today, the same design that defined the Canadian penny for over 75 years continues to inspire, seven years after its retirement from circulation. This commemorative counterpart is twice the size of the original, and is struck in 99.99% pure silver and fully gold plated.

Brand new technology and a classic design—all in one beautiful coin. Order today!

Your coin is beautifully presented in a Royal Canadian Mint branded wooden box, lined with black flocking and including a removable insert and special certificate compartment. Also included is a graphic beauty box.

Now: $519.95
Was:
As a symbol of Canada, the maple leaf evokes freedom for people around the world. It’s an ideal that has lured untold multitudes across great open waters to a New World; its vast, unknown and untamed...

Now: $114.95
Was:
The maple leaf is a powerful national symbol—one with a distinct and elegant shape that captures much of Canada’s nature—winters that have influenced the way the world views this land and its people;...

Now: $649.95
Was:
DESCRIPTION  Pull back and see the bigger picture. The successor to the Royal Canadian Mint's Big Coin series of 5 oz. 99.99% pure silver coins, The Bigger Picture zooms in on Canada's...

Now: $109.95
Was:
DESCRIPTION  From the great victories and tragic losses of the First World War came our most enduring symbol of service and sacrifice: the red poppy, which is colourfully highlighted on the...

Now: $109.95
Was:
DESCRIPTION  Dazzling enamel recreates the six coloured wedges of a winning game piece! Order today! In 1982, what would become one of the best-selling board games of all time first...